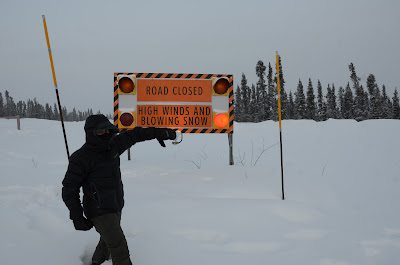 Now we've got ourselves a true Arctic MINI run! We departed Dawson at 6:15 sharp. It was snowing and slick and there was no word on what conditions up ahead were. Just 12.5 miles from the hotel, Car 16 called out that they were off the road. When we arrived they were well off the road and pretty deep in. MINI to the rescue with the biggest shovel in the group, and along with Car 13, we dug the wheels out. It just so happened a tractor trailer was coming by and he actually stopped to see if we were ok. He said if we were quick, he'd be willing to tow the Yaris out, and that he did! I sadly couldn't get video, as it was too dark. In a few minutes we were on our way again.


At 25 miles, we turned onto the Dempster. This is the big boy, the one leading to the ice road. Immediately, we knew this was going to be much harder than previous day's drives. It was still dark, snowing, there were drifts everywhere, and you couldn't see the edge of the road well. Our pace was certainly slower than previous days, but we weren't exactly crawling. It was going to be difficult because between the rough roads and high elevations, mileage was going to be junk. This is where the MINI shined. The two 2WD cars moved along happily sipping gas. As we got further and further you heard calls from the 4WD people stopping to put in their emergency gas. We made it all the way and still had about a 1/4 tank, same for the Yaris. It was very cool to see the sun "rising" over the mountains. I think it was around 8am before it was actually visible over the horizon. But the views were pretty spectacular. Huge peaks, open plains, and drifting snow. And the trucks. Oh, the trucks. After you've passed a semi on the Dempster, you need to check your pants. There were only a few, but it was very nervous driving when they came. 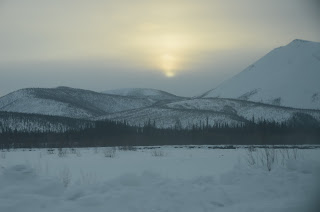 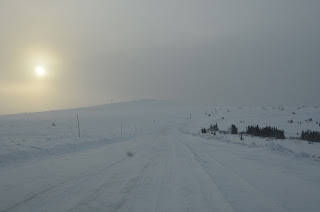 About 30 miles or so from town, Car 8 went to pass our group and went off the road. Once again, the MINI shovel was called into action. By now most of the group had pulled close together, so Truck 6 stopped as well. A chain was formed with 6 hooked to 13 who was hooked to the rear of 8. The first effort was unsuccessful, but the second try did the job, yanking the beached Subaru, and shredding Steve's snowsuit in the process. And then, just a few hundred feet from Eagle Plains, Car 4 ran out of gas. By this point, many people were way ahead of us, and the word was out that the gates were down barring further progress to Inuvik. 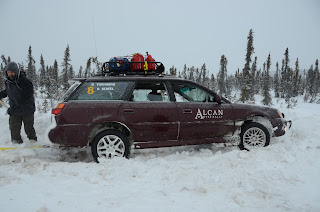 We pulled in, badly needing restrooms, gas, and food. As we'd done some digging for him, Yaris Steve was most generous and bought us breakfast. While we sat and ate, Sweep arrived and used the satellite phone to call the event organizers. There was question as to whether we would be staying here, or turning back around and driving back to Dawson. Well, for some people there was a question, but to our group there was only one answer: we wait. It was declared that we were to turn back and return, but you could choose to stay here at your own risk. No sweeps would be staying with us and we would no longer be supported. Either the thought of being left alone on the ice highway or the highly competitive edge of the ralliers not wanting to miss a TSD caused most of the cars to turn back. Seven of us decided to hold tight and ride it out here. At the very least, we cross the Arctic Circle, at best, we make it to Tuk. Eventually, we may even be able to meet up with the group again. We told them we would stay in contact so they could adjust the boarding accordingly. Yaris Steve lost his navigator, so I am resuming my duties as Arctic MINI carhopper and will be jumping between cars to keep people fresh. 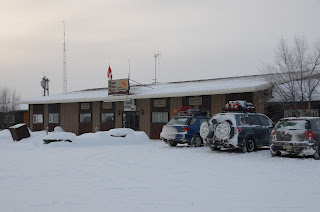 So here we sit at the hotel, plotting our next move. There are a lot of motives, skill levels, car technicalities, and personalities involved. I don't know if a uniform plan can be agreed upon, but we're doing our best. It's cozy enough, there's a restaurant and bar. The rooms are some of the shadiest I've stayed in, I'm kind of glad I'm with the guys, not that there's anyone here to bother us. Time to start drinking!
Posted by Annette Murano at 12:33 AM

Annette Murano
Some people call vacation sitting on a beach with umbrella drinks. To me, it's not a vacation unless it involves months of careful planning, some element of danger, and at least once on the trip thinking "My God, why the hell did this seem like a good idea?!" From an early age I've always had a desire to travel, and now I relish every opportunity to visit the ends of the Earth.